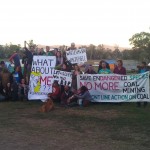 In a much anticipated case, Whitehaven Coal gave an undertaking in the Land and Environment Court this afternoon to immediately cease all clearing in the Leard State Forest, pending a full court case in September. It gives credence to calls from environmentalists and the community that clearing in winter is an unlawful act, the approval of which has been deeply flawed.

Front Line Action on Coal spokesperson Helen War said “This afternoon was a victory for commonsense, which is usually the underdog. Long have we known clearing in winter months is wrong and cruel; Whitehaven Coal should be feeling deeply sorry to have started bulldozing at this time.”

The Leard State Forest is home to a Critically Endangered Ecological Community of White Box trees, which houses a multitude of vulnerable species, such as Corbens Long-Eared Bat, the Koala, and the Swift Parrot.

Today’s decision is yet another hurdle for the $767 million coal project, which has been the subject of consistent and ongoing protest from community groups, local farmers, and the broader community, many of whom have passed through the Front Line Action on Coal camp.

“This victory should indicate to shareholders and future investors that the coal ship is sinking, and Whitehaven’s troubles are far from over. This is just one battle in the fight for the Leard Forest. We’re not going anywhere, and we’re going to fight this until the end.”