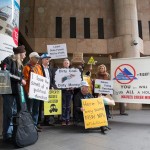 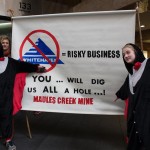 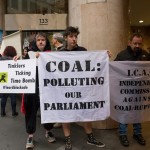 An alliance of ten non-government organisations  has called on the Baird Government to order a halt to work on the Whitehaven open-cut coal mine  at Maules Creek, NSW, and a carry out a complete audit of the approvals process, following  revelations from the Independent Commission Against Corruption (ICAC) regarding former owner Nathan Tinkler, detailed in Crikey yesterday.

ICAC has heard allegations that Nathan Tinkler, the owner of the Maules Creek mine during most of its assessment phase, attempted to buy influence with politicians using prohibited donations to subvert the planning process in relation to a number of developments, including a proposed coal terminal in Newcastle and a sub-development in North Richmond.

The Maules Creek mine was the first mine in the state in which the community was banned from appealing the approval on its merits, and was approved after disgraced former resources minister Chris Hartcher cut short the Federal Assessment by leaking a market-sensitive letter to the press.

The community has objected to the mine’s impact on thousands of hectares of critically endangered forest and on water resources in the State’s food bowl as well as its potential to contribute to global warming.

“Given the apparent willingness of Nathan Tinkler and his associates to pay politicians and cut corners in relation to multiple developments, Mike Baird must hit the pause button on the The Maules Creek coal mine until community confidence in the planning process is restored,” said green group spokesperson Blair Palese.

“This coal mine approval involved multiple failures of process, including flawed offsets, a refusal to hold Whitehaven accountable liable for land rehabilitation, no right to appeal and barring the traditional owners, the Gomeroi people, access to their sacred sites,” Palese said. “The NSW Government has intervened in this project a number of times to smooth the way for Whitehaven,” said Palese. “They must now heed the public outcry and ask the Director General to do a full inquiry. The project must be put on hold immediately.”

The mine is now owned by Whitehaven Coal, chaired by former Aston Resources chair Mark Vaile and managed by former Patinack Farm director Paul Flynn. The original application for the Maules Creek mine was lodged in 2011 by Tinkler’s Aston Resources and received federal approval on February 11, 2013, when Nathan Tinkler held a 19% stake in the company.

A treasury official told ICAC last Friday that he was not convinced that Buildev wanted to build the coal terminal, but rather wanted to bump up the value of the Maules Creek mine by proving a capacity for vertical integration.