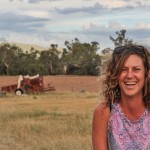 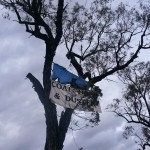 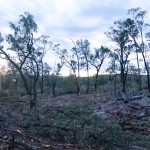 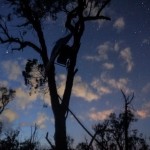 As Forest clearing continues for the controversial Maules Creek coal mine, so does the fight to stop it. 35 year old fisherwoman Christy Horton has suspended herself from a tree in the Leard State Forest, halting bulldozers.

Ms. Horton said “The Leard State Forest contains some of the last 0.01% of the critically endangered gum woodlands left in the world and it needs to be protected against coal mining. Whitehaven’s ‘offsets’ are a total sham, and in no way hold the same ecological value. They don’t even have to fill in the gigantic black hole that will remain”.

Ms. Horton is from the Whitsundays, where the Great Barrier Reef is another priceless natural asset under threat from the mining industry. Like the Maules Creek mine, the Abbot Point coal terminal has been condemned by ecologists due to inadequate environmental protection.

“The Leard Forest Alliance is calling on New South Wales Environmental minister Rob Stokes to come and see the ‘offsets’ Whitehaven are calling ‘like for like.’ He will see that this mine is destroying critically endangered woodlands that are completely irreplaceable.” Said Leard Forest Alliance spokesperson Roslyn Druce.

“If our governments are going keep selling out endangered ecosystems for mining dollars, then they should expect more people to take direct action against the construction of these mines.” warned Christy.

UPDATE: 1:17 pm Christy is down from the trees and has been arrested. On her way to Narrabri.

UPDATE: Christy is now safe and sound at home, “That was exhilarating! But painful to see the destruction first-hand, I urge anyone thinking of coming and helping, to just do it!” Said Christy.