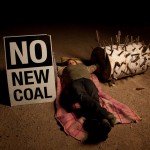 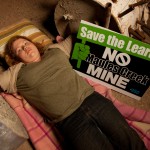 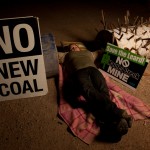 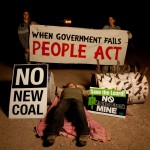 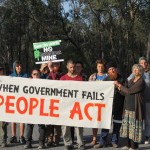 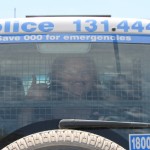 Today access to Whitehaven coal’s controversial Maules Creek Project has been blocked. Chantelle Brown, 23, has locked themselves to a concrete structure, blocking the main access point into the site. This is part of ongoing protests against Whitehaven Coal’s Maules Creek project, and global climate change driven by fossil fuel use.

Whitehaven Coal’s intention for the Maules Creek project is to clear critically endangered ecosystem of the Leard State Forest, and damage surrounding farmland, to build an open cut coal mine. As the largest new coal mine currently under construction in Australia, the Maules creek project will contribute irrevocable damage to our climate.

“The shonky Maules Creek project is not only exemplary of a broken planning system in NSW, but of federal inaction on climate. On a global level, people should not be expected to stand aside whilst Tony Abbott furthers a ‘suicide strategy’ to back the coal industry and bail on the UN climate summit. It is time for the people to act” said Emily Rose, Leard Forest Alliance spokesperson

“I am taking action to draw attention to the ineptitude of the current state and federal governments, and their approval in building the largest new coal mine in Australia to the detriment of the people and the environment.” said Chantelle Brown of Wauchope, NSW.

The Leard Forest Alliance is calling for work to stop on the Maules Creek Project, while a full audit of the Planning Approval process at both state and federal levels takes place. Given the coal linked corruption unveiled at the NSW level of ICAC, we now need a federal level independent investigation.

In the last week we have seen massive action on climate here in Australia. On Friday the Pacific Climate Warriors blockaded the largest coal port in the world in Newcastle, and Monday Whitehaven’s offices were shut down in Sydney by citizens concerned about the devastation caused by the Maules Creek project, and climate change.

“There is no Planet B. There is no ‘economic growth’ on a dead planet” said Ms Brown

“We are not going anywhere, and we know Whitehaven are shaking in their boots” said Ms Rose.

There has been a protest camp set up in opposition to the Maules Creek project for over 2 years, and this year has seen 264 people arrested in protest as part of the campaign.

UPDATE 12:20PM: Chantelle has been arrested and taken into custody