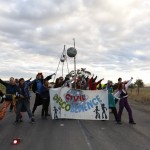 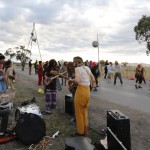 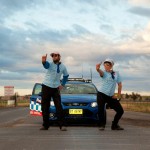 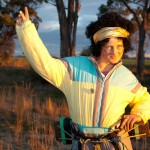 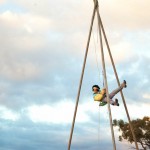 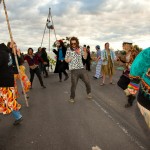 Today, a group of over 30 people have held a dance party with a human disco ball shutting down the Whitehaven Coal haul road in an act of ‘Civil Disco-bedience’. This action marks the second year anniversary of Front Line Action on Coal’s Leard Blockade camp peacefully fighting the biggest coal mine under construction in Australia, Whitehaven Coal’s Maules Creek Project.

The Maules Creek coal mine is set to destroy large sections of the Leard State Forest whilst draining the water table, degrading farmland and the coal, once burnt, will be a significant contributor to catastrophic climate change.

Leard Forest Alliance spokesperson Meret MacDonald said, “Whitehaven’s mine should never have been approved. A cloud of corruption hangs over coal approvals in this state, exposed by the recent ICAC investigations which resume this Wednesday. We are calling for a royal commission into the approvals process and revoking of dodgy mining licenses, like Maules Creek, in NSW.”

Phil Evans, Leard Forest Alliance spokesperson added, “We need more than Baird Government words and buck passing. These mines should never have been approved by the previous corrupt government. We call on Planning Minister Pru Goward to show to us she is above corruption, and revoke the approval for the Whitehaven Coal’s Maules Creek project.”

Today’s action saw people dance to the tune of The Beegee’s Staying Alive, whilst an acrobat dressed as a disco ball hung from a tripod blocking coal trucks on the haul road into the Tarrawonga coal mine near to the Leard State Forest. The Leard Blockade peaceful protest camp has generated a massive groundswell of support across the country of people wanting to protect farms, forest, community, culture and the climate. 243 people have been arrested this year.

Ms MacDonald added, “The last two years have seen not only huge numbers, but an incredible diversity of people that are finding civil-disobedience not only their duty, but a necessity to say no new coal”

Mr Evans affirmed the intention to continue the fight to the end saying, “We are not going anywhere. The Leard Forest Alliance is in this for the long haul, and we won’t rest until Whitehaven are stopped from destroying this unique, irreplaceable area.”

UPDATE 8AM: The band continues to pump out disco tunes on the haul road, police are in attendance and full time ‘disco’ mum, Emily Currey, 22, is perched in a tripod structure blocking coal trucks from entering and exiting Whitehaven Coal’s Tarrawonga mine.

UPDATE 8:45AM: Police Rescue have arrived and begun to assess the situation. Emily Currey remains in the tripod blocking the road as band Butter Nut Thing continue to play disco tunes.

UPDATE 10AM: A cherry picker has arrived on site, Emily is still blocking coal trucks on Whitehaven Coal’s haul road.

UPDATE 11AM: Emily has been arrested and taken into custody.

UPDATE 12PM: The Civil Disco-bedience party has moved on to Whitehaven Coal’s office in Boggabri.

UPDATE 5pm: After a very long day, Emily is safely released from police custody and charged with hinder to mine, and trespass charges.