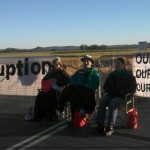 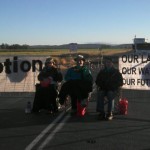 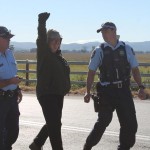 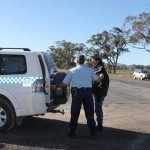 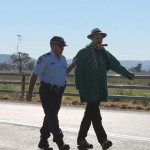 Singers from the  Ecopella choir have stopped work today as part of ongoing protests to protect Leard State Forest, the surrounding Maules Creek community and the planet from coal mine expansion. Miguel Heatwole, 54, Dallas de Brabander, 60 and Andrew Lenart, 51, have locked themselves onto the gate of Whitehaven’s Tarawonga Coal mine, blocking vehicles and preventing any coal from being transported out of mine.

Director of Ecopella Miguel Heatwole said “for 16  years our choir has been raising it’s voice for the environment, but we feel that our voices are no longer enough and we are now backing up our songs with non violent direct action.”

He added “We are proud of our track record of bringing harmony to the environment and are therefore opposed to Whitehaven coal causing harm to it.”

Their action comes in the wake of national Divestment Day on Saturday 3rd of May which saw over 1000 customers of the big  4  banks withdraw their money and switch to an environmentally responsible bank. The choir is calling on Australian’s to take their money out of ANZ and other fossil fuel financing banks. Over the past 5 years alone ANZ have loaned $6749 million to coal, oil and gas projects.

Leard Forest Alliance Spokesperson Lou Mayfield said “recent climate projections predict a 4 degree rise in temperature by 2100. In this time of climate crisis, it is irresponsible for ANZ to be financing projects such the proposed Maules Creek coal mine which would emit 30 million tonnes of carbon dioxide per year, the equivalent to the annual carbon emissions New Zealand’s energy sector”

Since Whitehaven’s Maules Creek project began construction in December over 150 people from all walks of life have been arrested taking direct action to stop this mine going ahead including scientists, doctors and religious leaders.

Photo’s and video available at-
https://www.mediafire.com/folder/nwa89ujtyd1hn/Ecopella_Choir_stops_coal_-_Tuesday_May_5th

UPDATE 10:45am: Ecopella have been arrested and are in custody being processed by police.