Brisbane Residents converge on CommBank to save the reef 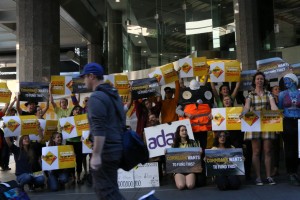 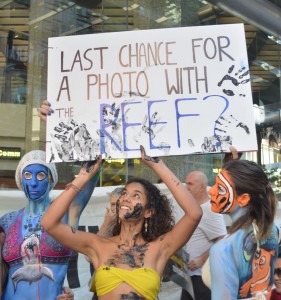 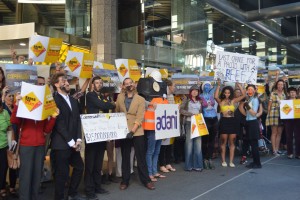 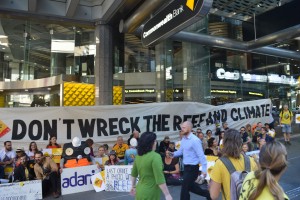 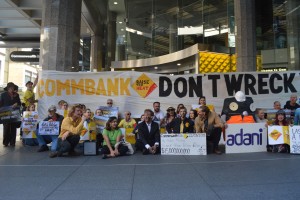 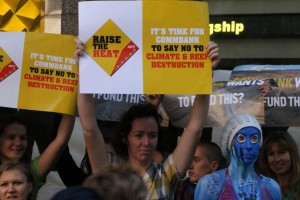 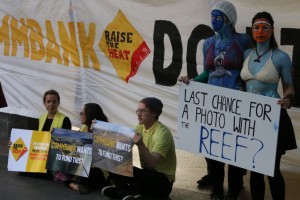 Over 70 concerned Brisbane residents gathered today at CommBank’s Queen Street branch to demand they publicly rule out funding the expansion of Abbott Point and destruction of the Great Barrier Reef. The bank closed for the day  rather than listen to the public’s concerns.  They held a banner reading “CommBank Dont Wreck the Reef and Climate” they were joined by models in full bodypaint as the reef.

Commonwealth Bank is Australia’s second largest fossil fuel investor. At the end of 2014, the Australian Financial Review identified the Commonwealth Bank as the first/only Big 4 Australian Bank to have indicated their involvement in financing the Abbot Point/Galilee Basin expansion in Queensland. Half of the world’s major lenders have gone on record to rule out funding coal and mining industries

“The outlook for the reef is really grim, but we still have time to turn it around. We can have these mines and this port or we can have a healthy reef. We can’t have both.” Dr Selina Ward, Reef Scientist

“The reason we are here today is that if Adani is allowed to do what it wants they will destroy the reef. We are demanding CommBank to publicly rule out funding of the Galilee basin mines and abbot point coal port expansion.” said Lauren Mickle Front Line Action on Coal Spokesperson

“People in the Brisbane community are deeply concerned about what’s happening to the Reef, and we join thousands around the world prepared to stand up and defend it” Ms Mickle continued
“This Week of action is just the beginning both in Australia and internationally. The people will keep showing CommBank it’s time to rule out these projects until they heed our call and rule out the Galilee Basin coal mines and Abbot Point.”Said Ms Mickle