BREAKFAST PROTEST ON THE ROADSIDE AT MAULES CREEK 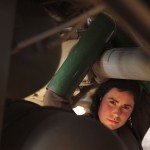 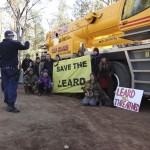 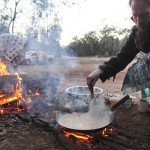 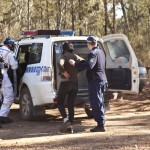 A group of 20 Leard Blockade protestors have held a breakfast protest on the side of the road into Whitehaven Coal’s Maules Creek mine project.  One protestor, Christine Charles, 20, has locked herself onto a truck carrying a massive crane into the mine and holding up other trucks attempting to deliver parts into the mine construction site.

Police have arrived on the scene of the protest, but have also investigated possible traffic infringements involving the trucks carrying the equipment. One protestor described the tyres of one of the trucks as “bald” and saw a police officer investigate further.

The protest comes as Whitehaven Coal step up their efforts to continue construction of the scandal plagued project.

Phil Evans, Leard Forest Alliance spokesperson said, “We will not stand by and watch the Maules Creek community be torn apart by coal mining. Increased cost of living, new water challenges for drought affected farming areas and the social problems that a whole army of fly in, fly out workers will bring, are not Whitehaven’s false promise of increased prosperity to the area.”

This week has seen an increase in protest activity with 7 people already arrested stopping work at the proposed mine site.

Mr Evans added, “People have come from around Australia to stand up for farms, the Leard forest, the local community, the Gomeroi culture and the climate against this dodgy project with questions about corruption still plaguing it. We need a Royal Commission in NSW to review planning approvals to clear the air on mining corruption, and until that happens, Whitehaven Coal must stop work.”

The Leard Blockade camp was established almost 2 years ago.

UPDATE 10am: Police Rescue have cut Christine off the truck and taken her into custody.

UPDATE: Christine has been released from police custody and charged with not obey direction of police/authorised person  and pedestrian obstruct driver’s/other perdestrian’s path.