Be a hero Pru 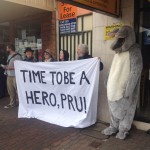 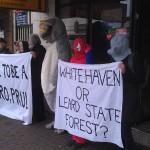 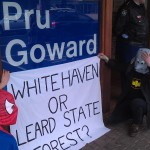 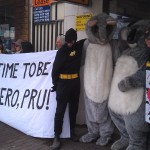 A group of over a dozen environmentalists dressed as superheroes and forest creatures have been joined by a choir at the electorate office of Planning Minister, Pru Goward. The group, which includes locals from Goward’s Goulburn electorate, are calling for her to ‘be a hero, and save the Leard State Forest.’

Despite an earlier amendment being the subject of a current legal challenge, the Planning Department are now considering Whitehaven Coal’s third amendment to its Maules Creek mine Biodiversity Management Plan. The submission of the new plan was made late last week and led to the adjournment of the case, to be heard again on the 12th September.

Phil Evans, Leard Forest Alliance Spokesperson, said, “You just can’t keep expecting to change the rules of the game – especially before the umpire has made a decision.”

The new plan submitted would allow Whitehaven Coal to clear the forest in Spring, and would effectively green light the slaughter of animals, and their young, as they begin breeding cycles. Other mining companies in the area do not undertake clearing in the times applied for by Whitehaven.

“Over 30 species in the Leard are threatened or endangered – and are therefore protected and special – whereas Whitehaven Coal are not protected and need to stop expecting special treatment.

“The decision now lies with the Planning Department, and we call on Minister Goward to pull on her tights and cape – to be a hero of truth, integrity and justice, and to save the Leard from Whitehaven’s bloody bulldozers.”

Don’t forget to call Pru Goward and ask her to be a hero! Follow this link for for information…

Update 10am: Pru’s office is locked and being guarded by police. She won’t see us.

Update 11:30am: Front Line Action on Coal join with locals to drop flyers in letterboxes of Pru Goward’s electorate of Goulburn – asking for them to call Pru and ask her to deny Whitehaven Coal a new Biodiversity Management Plan.