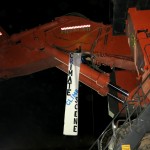 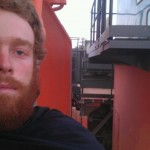 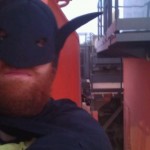 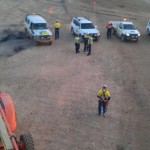 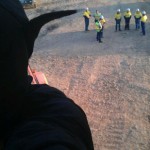 -MAULES CREEK 5 November 2014: Batman returned today to shut down Whitehaven’s Maules Creek project. A person dressed as Batman has scaled Whitehaven’s largest excavator, the Hitachi Super Digger. This action comes on the heels of Monday’s report from the UN Intergovernmental Panel on Climate Change (IPCC) finding that damage to the environment caused by fossil fuel use continues to increase. Today is the fourth consecutive day of the Release the Bats Act Up stopping work on Whitehaven sites.

The Hitachi ex8000 Super Digger is a key piece of ‘ultra class’ mining machinery with a 75 tonne scoop capacity. This equipment is essential if Whitehaven is to get coal out on their forever-shifting date for first coal.

Lewis Laurence, 23, who is on the excavator said “We want to draw attention to the human cost of climate change, the real cost of this mine to the global community. What happens here affects fishermen thousands of miles away, who may no longer have homes to return their boats to. Instead of asking ourselves, ‘Where were we? What did we do?’ We need to ask ourselves, ‘What are we doing now?’ ”

The United Nations IPCC report suggests that we are doing very little, warning of catastrophic climate change just around the corner if we do not act now. According to the IPCC a predicted increase in the global temperature of 20C is a threshold beyond which impacts would be irreversibly damaging. Whitehaven’s Maules Creek project is increasingly detrimental to our climate and environment, globally as well as on a local scale.

“Whitehaven have been given permission to destroy a large portion of the Leard State Forest for open cut coal and will leave behind a ‘void pit’ which will collect water and poison the local aquifers,” said Mr. Laurence

“Whitehaven will face no charges and will accept no responsibility for their destruction unless people stand up,” said Emily Rose, Leard Forest Alliance Spokesperson

The Leard Forest Alliance is calling for a stop work order on the Maules Creek project while a full and proper audit of the planning and approvals process at state and federal levels is conducted.

“This mine should never have been approved. The potential damage to local aquifers and impacts on climate display a single-minded interest in profit from our state and federal government. We must heed the international consensus, and leave coal in the ground,” said Ms. Rose

This last week has already seen a number of Whitehaven sites shut down through peaceful civil disobedience including: the co-owned Idemitsu and Whitehaven Tarrawonga Haul road, access to the Maules Creek mine site, the Maules Creek Hitachi excavator, as well as Whitehaven’s Narrabri North underground mine which also halted a supply train carrying 6000t of coal.

There have been over 270 people arrested as part of the campaign to defend the Leard State Forest.

UPDATE 7:00AM: Police Search and Rescue arrive at the scene.

UPDATE 8:00AM: Confirmation that Lewis has been arrested and taken to Narrabri Police Station.