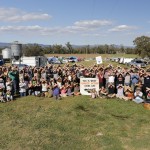 – MAULES CREEK, 13 – 18 February 2015: The long running Leard Blockade camp opposing Whitehaven Coal’s controversial Maules Creek mine in the Leard State Forest has declared 6 days of protest against a fresh round of clearing in the critically endangered forest. The gathering, called Bat Attack, will feature musicians and artists from around the country and promises to be a new high point for the community lead campaign of peaceful civil disobedience.

Leard Forest Alliance Spokesperson Ros Druce said, “We are calling on people to rise up and join this creative resistance against big coal and the corruption it brings to our democracy, the damage it causes to the land, its people and of course to our worsening climate.”

Hundreds are expected at the event – joining the thousands who have already visited the camp. To date over 320 arrests have been made including that of prominent Australians such as former Wallabies captain David Pocock, 3 time Golden Guitar winner Luke O’Shea, IPCC contributing author Colin Butler and 92 year old WWII veteran Bill Ryan. Locals Ros Druce, Rick Laird and Adam Ryan are also amongst those who have taken arrestable action.

In winter, Whitehaven attempted to clear the forest, sparking mass protests and a challenge in the courts which saw the forest clearing program halt due to questionable approval of the activity by NSW Planning. Bat Attack coincides with the beginning of Whitehaven’s revised clearing schedule.

Ms Druce continued, “The Maules Creek mine itself has and will always be a perfect example of everything that is wrong with coal mining and its disregard for humanity and the environment. Australians – young and old – will not stand for this anymore – and the Leard Blockade is just the beginning as this sentiment spreads across the country.”

“We have called on government to look into how this mine was approved and it has fallen on deaf ears. We can only assume that it because there is something to hide – but the fight continues and we are working to ensure that dodgy projects like Maules Creek never happen again.”

Whitehaven Coal and its neighbour Idemitsu Resources are 12 months overdue submitting a Regional Biodiversity Plan which is supposed to set out how the coal mines plan to mitigate any impacts they have on the fragile ecosystems of the Leard.