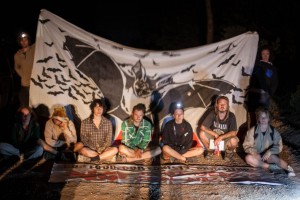 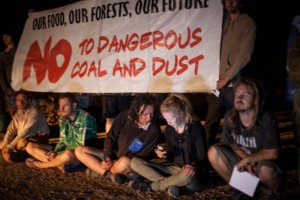 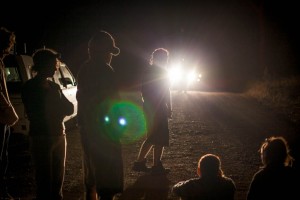 Actions continue after a massive week of protest against the controversial clearing of Leard State Forest for Whitehaven and Idemitsu’s open cut coal mines. Today, 14 people are occupying Leard Forest Road by sitting on the road and blocking access to the mine. They are calling on NSW Premier Mike Baird to put a stop to the clearing of State Forest that is taking place over the next ten weeks.

“If Premier Mike Baird does not end the senseless destruction of the precious remnant woodland of the Leard State Forest, he can expect protest and community resistance to any and all new coal projects in NSW.” Said Roslyn Druce, Maules Creek local and spokesperson for the Leard Forest Alliance.

This week, Whitehaven has commenced its second year of clearing in the Leard State Forest for the Maules Creek project. The forest comprises some of the last intact critically endangered box-gum woodland left on earth. The NSW Office of Environment and Heritage’s assessment of the project impacts has described the forest as “irreplaceable”.

“This forest is an essential ecosystem, home to many endangered species. We need to stop this now, and any other project that causes irreversible destruction to this degree. The greed of companies selling public resources has gone this far and it will never happen again” says Andy Paine, a Brisbane community radio-presenter, one of the people occupying the road.