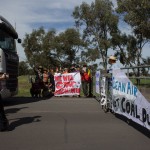 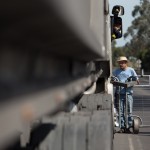 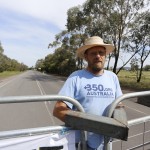 Today a 65 year old man has halted work at Whitehaven Coal’s Processing Plant in Gunnedah as part of ongoing community opposition to coal mining in the Leard State Forest.

John Ross, 65, has locked himself to the gates of Whitehaven’s Processing plant in Gunnedah, blocking access into the facility.

Mr. Ross, small business owner, said, “This mine should never have been approved by the government. The amount of money that’s being provided through subsidies to coal mining could provide immense benefits for community and the environment if invested in renewable energy. The fact that the project was approved in the first place, proves that protective legislation is overruled by major corporations to make profits.”

Whitehaven is currently constructing the controversial Maules Creek mine that has sparked massive protests, which last month saw 88 people arrested on a single day of action. Whitehaven were recently subject to a year long criminal investigation into their forest offsets which was a critical part of the approval of the mine.

Leard Forest Alliance Spokesperson, Dani Joy, said that “Despite the Department of Environment’s admission that there were false and misleading aspects to Whitehaven Coal’s recently released offsets report, they have allowed the Maules Creek mine construction to continue, and will not be investigating it any further.”

“You tie this fact in with concerns over political donations and the wider ongoing ICAC investigation and you start to see a pattern of corrupt and dishonest behavior that can only be resolved with a royal commission into the mining approval process.”

Providing adequate offsets are part of the Federal Government’s conditions for the approval of the project.