24 hours to tell the Government to cut coal

The Climate Council has released a report today saying that if all of Australia’s coal resources were burned, it would consume two-thirds of the global carbon budget. They tell us it’s likely that over 90% of Australian coal reserves are unburnable, even under the most generous carbon budget.

This comes just one day after the Climate Change Authority, one of the few Government agencies left that is dedicated to climate change, released a draft calling for a stronger emissions reductions target. The chair, Bernie Fraser said of Australia’s current attitude,

“The assertion that, as a small emitter, Australia could sit on the sidelines of this particular global contest was always more self-serving than credible; to maintain that posture in the light of increasing international actions to reduce emissions—by developed and developing , big and small countries—makes it even less credible”.

People in Australia and around the world are suffering the effects of climate change, even with less than 1 degree so far of global warming. People in Sydney, the Central Coast and Hunter Valley can definitely attest to that this past week. 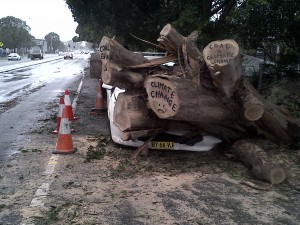 The Federal Government has wound back Australia’s climate change mitigation plans, and is now asking for views from the public about our post-2020 emissions reduction targets. We think an action plan on capping and cutting coal exports should be part of that effort, do you?

Have your say here.

While people like you have been actively fighting climate change in places like Maules Creek, Newcastle and the Hunter Valley, Federal and State Governments in Australia have so far failed to realistically address the issue of global climate change, and the Climate Council’s report today shows us that we do not have any more time to waste.