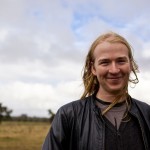 The third and last person in an ongoing treetop vigil descended late last night from a 182-hour canopy watch in the Leard State Forest, after learning that Whitehaven Coal had given an undertaking to immediately cease clearing. Sam Cooper, 23, has been up a tree for several days listening to bulldozing work for the controversial new Maules Creek coal mine.

Mr Cooper said, “When I saw the cleared areas for the mine, I realised I’d never properly experienced disgust. That it took Whitehaven until the eleventh hour to give an undertaking in court stresses to me that this is a coal company without integrity, and certainly without any social license to destroy Leard Forest and pollute the globe.”

Clearing of the forest is the first phase of the $767 million project that would produce 18,000 tonnes of coal dust pollution annually, as well as an estimated production of 13 million tonnes of coal.

Mr Cooper added, “I wish that shareholders in these companies actually knew what their money was going to. My time in a tree was beautiful; but tainted by the continual sound of crunching machines. It was unnerving to be up there, with the birds, awaiting inevitable bulldozers, but ecstatic to learn of the paused destruction of the forest.”

Over 220 people have been arrested since January in the Leard State Forest and surrounding areas in protest of coal mines.