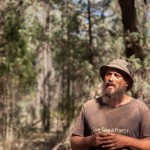 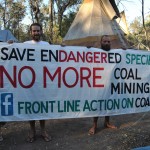 From the desk of Murray ‘Muzz’ Drechsler…

I heard about the Leard State Forest whilst I had been running mystery dingo tours out to the Pilliga State Forest, looking at the effects of coal seam gas on the area.

That it was an open cut coal mine in a state forest was all that I had heard. I went home to Upper Main Arm Mullumbimby and looked into it. It was then that I realized that not much was happening, so I packed up my camp of a year and a half and came out to find out what I was capable of.

It began with just two of us in camp and Cliff dropping in between working on his farm. We had a few visitors in camp some weekends but things were slow to start. Then Johnno did the hoax. People began to hear about us in the forest and it all started to change and changed many times after that. The campaign  will always change, like the same water we are trying to protect.

More people started to come out to the camp in the forest and the movement got bigger. We were forced out of the forest to Camp Wando and from there we got even bigger  thanks to the alliance.

Our actions have been creative and daring, from one action to multiple actions on the one site to many site kms apart. Train actions, office actions, actions at sea and on land. In trees, on rail bridges, with much planning and often little sleep. Getting past police road blocks evading numerous security on site. On the bat attack week we even had police dogs, horses and drones to deal with, we have become very hard to stop!

We are driven by our love of the land. Mystery Dingo Tours of the Leard State Forest played a big part in opening many hearts to the beauty of the forest, allowing people the chance to see, hear, smell and taste the effect of the mines. Shocked, people felt that they had to take action to stop this madness. Along with the knowledge of how

Camp Wando has placed itself in history as a training ground for activists. This for me has been the most exciting part of what we do out here, watching shy kids come out with some amazing skills that allow them to play a role in major campaigns.

Hearing back from the scouts, about how sensitive they have become , a super awareness of a hunter and from being hunted – by security, police, police dogs, drones . All of their senses working overtime to contribute to their never being caught, to having learnt to become just a shadow in the forest.

Living under the stars sleeping on the Earth

Living and sleeping in the outdoors, eating our meals as a family or tribe is, for me, as good as it gets. Together we remember an old forgotten life style. We’ve watched many city folk feel a bit nervous putting up a tent for the first time, then falling into the groove after a few nights being happy living in a tent or under the stars. Later they’ll tell me how hard is was to live back in the city in a house with 4 walls.

Living on the farm

City folk helping Cliff on the farm, learning about where their food has come from. For many, seeing for the first time wheat, canola and cotton being grown and harvested. They help with the hay harvest, they come to understand a little more of the country that they are a part of.

With Tenacity and resilience the moment will keep going and growing.

If you can’t shut down the coal mine,

then you shut down the coal company,

If you can’t shut down the coal company

then you shut down the industry

The Front Line Action on Coal movement is going to go national with FLAC Brisbane and FLAC Sydney having had there first meeting. With more groups in the planning.

Keeping to the tradition of non violent direct action and safer spaces polices, working closely with the traditional owners and community. Teaching news skills and leaning from those that we teach.

We stand stronger against the corruption of the government and the mining company’s destroying our land, water and our rights