The Biodiversity Management Plan (BMP) that Whitehaven is seeking approval for (for its Maules Creek mine in the Leard State Forest), is asking for special permission to clear forest, when other neighbouring mines cannot. This clearing should not be permitted.

The rules for the Boggabri Coal mine next door require that the “the removal of native vegetation … will be conducted outside known breeding/hibernation periods, during late summer or early autumn.” Whitehaven Coal’s nearby Werris Creek Coal Project is required to schedule “clearing activities …outside of periods of fauna breeding or hibernation/torpor”.

NSW Planning Minister Pru Goward must resist pressure to grant yet another favour to Big Coal at the expense of a forest which the Government itself has described as “irreplaceable … with ecologically unique values”. Don’t let them clear forest when 26 threatened bird, bat and reptile species are breeding in late-spring, early summer, including: the Little Eagle, Little Lorikeet, Turquoise Parrot, Yellow-bellied Sheath-tailed Bat, and South-Eastern Long-eared Bat. They will have either eggs in the nest or dependent young during October toDecember. The vulnerable Squirrel Glider is another hollow dependent species breeding at this time. If this approval is granted it will negate the current court case to be heard on 10 October when the Maules Creek Community Council are challenging the validity stop Whitehaven from clearing until February 2015. Please take action to stop Whitehaven getting the BMP approved.

(Feel free to download and use the picture below) 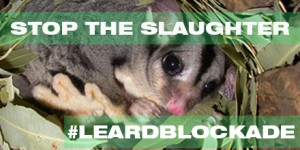